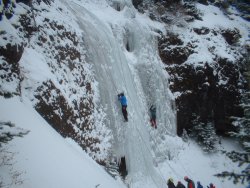 Located just south of Bozeman, Montana, the Hyalite Canyon has some of the earliest forming accessible ice climbing in the lower 48 states.

The ice climbing season is divided into three categories: early season, broad season, and late season. Early season ice climbs form when the canyon receives a wet fall. However, when the temperatures get colder, the water sources freeze and stop, resulting in brittle ice because no new ice forms. Broad season climbs usually form in drainages which have a constant source of water. Creeks in these drainages typically flow all year long, and in the winter, form fat popular climbs. Conditions of broad season climbs change throughout the winter from steep steps in the early season to broad sweeps later in the season. Late season climbs form when water flows during the day and freezes in the cold clear temperatures at night. Access to late season climbs usually require a snowmobile.

To get to Hyalite Canyon, turn off I-90 at Exit 305. Go south on 19th Street through town for nearly 10 miles. Turn left onto Hyalite Canyon Road. From the intersection, different climbing areas are located an additional 2-13 miles down the road. During the winter, Hyalite Canyon Road is occasionally closed due to heavy snows and the Forest Service decides not to plow. When the road does reopen, drive carefully as the road will become too narrow for two-lane traffic. When you approach an oncoming car, one of you will have to pull to the side to let the other pass. 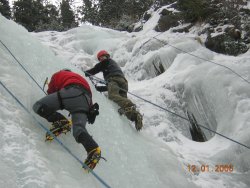 The Bozeman Ice Fesitval continues to get better. After more than a decade of running two of the best grassroots ice festivals in the country, Barrel Mountaineering and Northern Lights Trading Company have joined forces with First Ascent Press and Montana Alpine Guides to create one single ice climbing event to kick off the Montana Ice Climbing Season. Get ice climbing instruction and learn tricks and techniques from many of the top ice climbers in the world